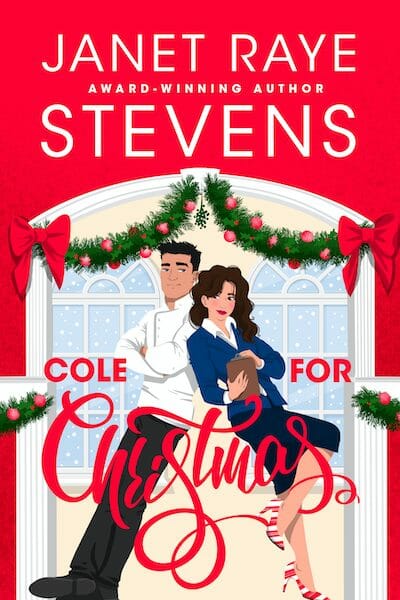 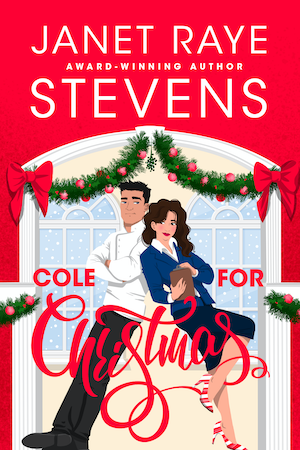 Event coordinator Katy Wilkins is called in last minute to sub for her perfectionist sister at a Christmas Eve wedding in Portland, Maine. Chef Cole St. Onge takes over from his temperamental boss for the same event.

The problem? Each thinks the other is their prickly counterpart and expect fireworks when they meet. It’s the sparks that fly between them that’s unexpected. And unwelcome—Katy’s skittish after a bad breakup. Left at the altar, Cole’s sworn off women for good. They both vow to just do their job and stay out of each other’s way.

That plan goes awry as troubles mount. A sudden nor’easter blows in, making roads slick and forcing guests to stay home. The stressed-out bride is left with no stylist, no photographer, and maybe even no justice of the peace if he can’t get un-stuck from the snow. Mix in an accident-prone groom, a power outage, Katy’s self-pitying ex making trouble, a matchmaking grandma, and lots and lots of mistletoe, and what’s supposed to be a magical Christmas Eve wedding fast becomes a Christmas nightmare.

Forced to team up to put out the many fires, the blaze between Cole and Katy burns brighter as the evening wears on.

Can they ignore their growing attraction and keep their relationship strictly professional? Or will they give in to the mistletoe and say I do to a Christmas kiss that promises more to come in the new year?

Katy looked out at the storm. A shriek of wind rattled the windows. Sleet ticked against the panes and snow squalls whipped across the lawn, tearing at the branches of the trees, weighed down with heavy, wet snow. The view of the ocean at the bottom of the long, rolling hill was obscured by a snowy haze.

“Volatile, but beautiful,” a voice said, making her jump. Blaine strode up beside her, adding,”The storm, I mean.”

Katy shivered. From the chill air, she told herself. Not from him, standing so close. Close enough to feel his body’s warmth. He’d changed from his jeans into his chef’s uniform, dressy black pants and white coat. The clean scent of cotton mingled with his own unique scent and the coat’s crisp white fabric offered a tantalizing contrast to his black hair.

“It is lovely,” she managed to squeak out. “But I prefer to be inside, out of the storm.”

“Not much warmer in here.” His breath steamed up the windowpane, leaving a spider-web pattern of ice on the glass. He turned to face her. “My support staff is running late. The snow’s slowing everyone down. They might not make it.”

A problem, certainly, but he sounded like the delays bothered him. Like she should be bothered too. “Well, couldn’t be helped,” she said coolly.

“I guess not.” He let out a gusty sigh. “If Mother Nature decides to gift us with a snowstorm for Christmas, what can a mere chef and a wedding planner do about it?”

“I prefer the term event manager.” She knew that sounded patronizing, but she needed him to know she took this job seriously, despite stepping in at the last minute.

“Oh, right. Sorry,” he said with a rueful look. And a flash of dimples.

Their gazes caught. His eyes sparkled with light reflected from the Christmas tree, his expression open and pleasant. Could Maggie have been wrong about him? He seemed nice, like the man she’d run into at the supermarket. Not just good-looking nice, but inside nice. He had kind eyes. She shifted her gaze to his mouth. Nice lips, too. Well-formed, welcoming.

Warmth flooded her cheeks and just about every other part of her body. All because of one simple word that had popped into her mind without invitation.

Blaine suddenly broke off his gaze and looked up. Katy did too and she swallowed a gasp. Just the thing she did not want to see, not with the direction of her thoughts.