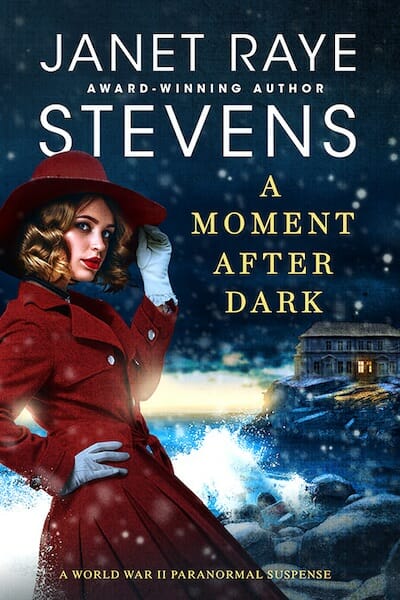 A Moment After Dark

She sees the future with a touch. A powerful gift in a time of war.

The enemy wants her.
The Allies need her.

Addie Brandt is cursed. When she touches someone, or an object that belongs to them, she sees their future, and it’s rarely good. Mocked and teased her whole life, Addie hides from the world in her family’s funeral home. But when her second sight shows her a horrific vision of an attack on the Pearl Harbor Naval base, the gruesome images are too intense to ignore, and she tries to raise the alarm. Will anyone listen?

Federal agent Jack Dunstan needs a miracle. He’s still reeling from the betrayal that nearly decimated his team of agents with paranormal powers, a vengeful Nazi spy with a terrifying ability of his own is out to destroy him, and he knows it’s only a matter of time before America is drawn into the war raging around the world. Hearing rumors of Addie’s vision, he seeks her out, hoping she could be the miracle he’s looking for.

Addie’s not sure she trusts Jack Dunstan. He’s rude, cocky, and insists on calling her curse of second sight a “gift.” But if she wants to save lives and prevent a terrible disaster, she has to put aside her fears and doubts and embrace her ability.

With the country on the brink of war and an enemy agent hunting her for her power, Addie must learn to trust Dunstan—and herself—to stop an attack that could change the course of history forever.

Addie Brandt dragged the tall stool close to the coffin and studied the man lying peacefully inside.

“Now, what can I do for you, Mr. Gallagher?” she murmured.

Not much, she feared. Old Gallagher was no John Barrymore. Not even Lionel Barrymore, with his basset hound looks. Addie retrieved the makeup basket Mother had given her the Christmas before she died. Try as she might with her paints and powders, she probably wouldn’t be able to make Johnny Gallagher any less unattractive in death than he had been in life.

That irked her. She’d been fond of the man. Not just because he was Uncle Pat’s friend. Because he wasn’t like the others. He didn’t stare or run away when he saw her. He didn’t dare touch her—no one in her hometown of Goveport, Massachusetts would touch her—but he’d always given her a kind smile when they met. She’d feasted on those smiles. For that, she owed him a face as handsome as Errol Flynn for his funeral.

Addie perched on the stool and got to work.

Gallagher’s brown suit smelled of mothballs. The scent mixed with the salty, chill wind blowing off the Atlantic, whistling through the window Addie had cracked open. Father would grumble about the cost of letting the heat escape, but she needed the fresh air. She’d been painting the dear departed, as Father called them, for their family business since she was eighteen, when Mother got too sick to do the job. Addie should be used to Brandt Funeral Home’s unique smells after four years. Should, but wasn’t. She doubted she’d ever get used to it.

Finished, she removed the towel she’d tucked under Old Gallagher’s chin to keep face powder from speckling his white shirt. He wasn’t really old, no more than fifty, Uncle Pat’s age. Like Mother, too young to meet his maker. Cancer had taken Mother at only forty-three. For Gallagher, it was a bum ticker.

Addie combed the man’s few wisps of grayish hair then reached for a small box on the counter that ran along the cement block wall under the windows. Some kind of jewelry, something her uncle’s sausage fingers couldn’t manage. Uncle Pat had been dressing the stiffs, as he called them, and attending to the more unpleasant aspects of preparing a body for burial for nearly twenty years. The delicate work, pinning on jewelry and buttoning small buttons, had been Mother’s job. And now Addie’s.

The box opened with a soft click and Addie gazed at the silver rectangle within. A tiepin, probably clipped on Gallagher’s brown tie with this suit for weddings, funerals, Easter Mass. She lifted the pin—and gasped as icy cold latched onto her fingers, shivered up her arm, and spread through her veins like a living thing.

Addie’s breath caught. No. Dear lord, please, no. Her silent plea went unheeded as the strange power that lived deep within her took hold of her waking mind. A thousand needles stabbed her brain. Her vision narrowed, as if she were thundering backward in a train tunnel. Then the world went black, and she plummeted into the gaping abyss of the Sight.

A moment later, the darkness peeled away, like sections of an orange breaking off until she looked up at a sky so blue it stung her eyes. She could taste its sharpness. She smelled warm sea air, mixed with hot metal, oil, gunpowder. Sleepy voices surrounded her, men just waking up. Heat baked her skin and bounced off metal walls of hard steel, joined together with silver rivets.

Looking down, Addie saw she had a man’s legs, wearing white trousers. A uniform?

An angry buzz droned overhead. She squinted into the sun as a swarm of metal locusts came into view.

“What in holy hell—?” A man’s rough voice came out of her mouth.

Airplanes. They flew in formation, ten, twelve, maybe more. Sunlight glinted off their wings. The first wave broke off and swooped in. The buzz became a roar. An explosion rattled Addie’s bones. She staggered. Smoke billowed, choking her. Men screamed and shouted in confusion and panic. Pain.

A man in a once-white Navy uniform, now covered with soot, pounded up. A boy, really, his face twisted in terror.

“Jimmy! It’s the Japanese,” he cried and scurried away.

Jimmy. Addie had slipped into the skin of a man named Jimmy, on a ship somewhere. Choking on smoke so thick and slick with oil she could almost touch it. Strangling on her own fear. One thought pushed through the chaos: I’ve got to man my gun. She plowed through the smoke, her shoes beating the deck.

Another explosion, like the fury of hell blasting open. The ship heaved. No, it lifted, as if a giant hand scooped it up then dropped it into the water again. She fell with a thud onto the deck. Heat seared her palms, scorched through her trousers and singed the skin off her knees. Nearby, a man wearing a suit of flames leapt overboard.

She managed to stand. She shaded her eyes from the glare and looked up. A plane dove through the smoke, the red circle of Japan like an angry eye on its side. Mother Mary, she prayed. Staccato flashes of machine-gun fire cut through the noise. Hot beads of metallic hail pinged the deck. A thousand knives of fire pierced her chest.