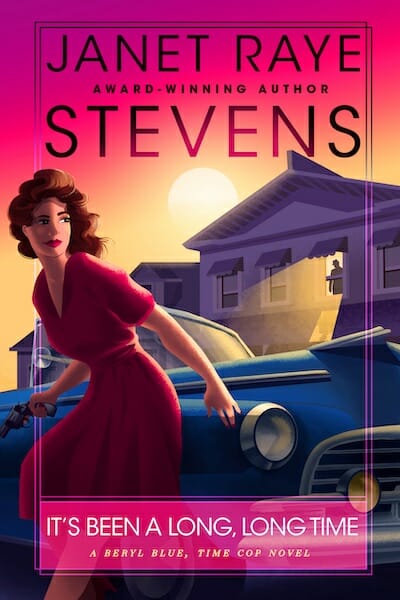 It's Been a Long, Long Time

It’s been a long, long time since Beryl Blue left her gruff and sexy Army sergeant Tom “Sully” Sullivan behind in 1943. Two years to be exact. Though her heart still hurts, she knows Sully’s life is at stake if they ever see each other again. She’s moved on with her new life as a time cop in the year 2132 and is even contemplating a new romance as she vows to put Sully, and the past, behind her.

But fate has other ideas. The discovery of an old suitcase leads Beryl to the New England seacoast in the summer of 1946 on a hunt for the man who killed her parents—and straight into Sully’s arms. Sully, the man destined to die, saving her.

A scorching heatwave, a jewel heist, explosive secrets from Beryl’s past, and the beautiful new woman in Sully’s life all come into play as Beryl struggles to catch a time-travelling thief, evade a killer, and keep her beloved Sully from falling victim to his destiny.

Come along on another journey across time with feisty librarian turned time cop Beryl Blue in this second thrilling adventure in the award-winning Beryl Blue, Time Cop series.

Time has met its match in Beryl Blue!

My target spotted me. I rushed forward, determined to get to him before he bolted.

A thin man in a baggy gray suit came out of nowhere and slammed into me. The force shot me into a big guy in a tee shirt, who flew into another man, and they butted heads with a thwack that reverberated across the pavement. The sound was like a gunshot starting a horse race. The mob exploded. Fists flew and so did profanity as two dozen men hurled themselves into the fight with deadly conviction.

I kept moving. I cut around two men grappling with each other like high schoolers at a wrestling match, and both of them losing. Someone’s fist whizzed by, uncomfortably close to my face. Someone else elbowed me in the side. Yet another someone tried to grope me. I blocked his grabby hands with an uppercut that sent him reeling—and knocked my stinger from my grip.

The weapon clattered to the ground. Frantic, I bent to scoop it up before someone could grab it, when a muddy shoe kicked it across the sidewalk. I kept my eyes on it as I chased after it, booted from foot to foot like a soccer ball whizzing toward the goal. Then, a hand reached down and plucked the zapper off the pavement. I lifted my gaze to see my target flash an evil grin and slip my weapon into his coat’s breast pocket.

Let’s see what you can do, Devon had said. How about screw up completely five minutes into the mission?

Anger and adrenaline pumped through me in equal doses, and I lunged for my target. Suddenly, a pair of muscular arms locked around my waist. Ugh, another groper. I smashed my foot down on his instep. He grunted but didn’t loosen his grip. In fact, he tightened his hold and yanked me out of the middle of the mob as if I weighed no more than a feather.

I cut off with a gasp. I looked down at the arms that held me pinned. I knew the feel of those arms, though it had been two years since they’d embraced me. I recognized those strong hands. I knew that scent, Lifebuoy soap and all man.

I twisted in his grip and turned to face a tall, broad-shouldered man with thick, copper-red hair peeking out from under the most ridiculous straw boater hat I’d ever seen. He looked strange in that hat, and in the civilian clothes he wore, a tan suit coat, trousers with wide legs and a high waistband, and a crisp, white shirt open at the neck.

But the rest of him was the same. The scar that slashed across his nose. Those wise sapphire-blue eyes with the smile lines crinkling at the edges. His strong, determined jaw, dotted with whiskers, and, oh, that deep Cary Grant dimple in his chin.

Of all the brawls in all the seaside villages in all the world, he had to bust into mine.

The man I desperately yearned to be with. The man I couldn’t forget and hadn’t been able to put behind me, no matter how hard I’d tried. The man whose life I put in danger just by being here.

My Sully. The man I loved.

Damn you fate, you ironic bitch.